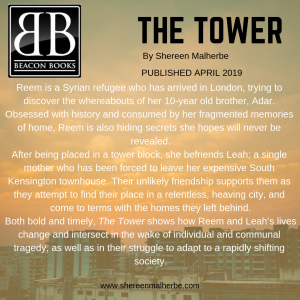 The Tower is Shereen Malherbe’s second novel, due out in April 2019, published by Beacon Books.

Reem is a Syrian refugee who has arrived in London, trying to discover the whereabouts of her 10-year old brother, Adar. Obsessed with history and consumed by her fragmented memories of home, Reem is also hiding secrets she hopes will never be revealed.

After being placed in a tower block, she befriends Leah; a single mother who has been forced to leave her expensive South Kensington townhouse. Their unlikely friendship  supports them as they attempt to find their place in a relentless, heaving city, and come to terms with the homes they left behind.

Both bold and timely, The Tower shows how Reem and Leah’s lives change and intersect in the wake of individual and communal tragedy, as well as in their struggle to adapt to a rapidly shifting society. 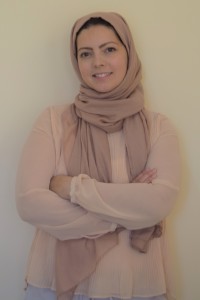 Why did you write The Tower?

I wanted to explore hope and humanity under circumstances that are relevant today. We are living in unprecedented times, with a global refugee crisis, a huge gap between the rich and the rest of society, the commodification of people and belongings. I wanted to capture this using a fiction novel, set in a contemporary city and the obvious choice for me, was to do that in London. I wanted to explore how diversity can be a strength and unify society. If we try to understand each other more and celebrate our shared humanity instead of using difference as a base for misunderstanding and segregation I think we would live in a better world.

What genre is The Tower?

It is contemporary, literary fiction.

What is the book about?

It is about a group of people, strangers mostly who, through various circumstances, end up sharing parts of their lives in the same community.

How long did it take you to write The Tower?

I started working on the idea about 18 months ago. It took about one year to finish the first draft and get the manuscript ready for publication.

Your last novel, Jasmine Falling was based in your heritage homeland of Palestine. How was it returning to your British roots for this book?

I wanted to set my novel in Britain and see the intersection between East and West. This is something both novel’s share. This element is present in The Tower, but it is almost in reverse. You have Reem, a refugee adjusting to London but seeing home though a series of perspectives. And home, as it is for millions of people now is not a set place. For Leah, she is British, but she also experiences this shift between what she used to know and the situation she now finds herself in. These shifting homelands is something I have experienced, and this was an interesting element to explore.

Are there any novels that inspired you to write this?

There wasn’t a book that inspired me to write this, but how widely I have read makes constructing fiction easier. For example, when I read Elif Shafak’s Flea Palace and saw how she represented a microcosm of Istanbul through having the characters share the building, I liked this idea. I also love the classic books Jane Austen wrote because there is something unique about how she captured life for women during her century and it’s important we continue to share our own unique perspectives to capture how we are experiencing the times we live in.

You write and research on behalf of Muslimah Media Watch on the representation of Muslim women, how has this work helped in your writing?

All our unique individual experiences add to the fabric of our writing and critiquing media has added to mine too. I hope that it adds authenticity and balance to the current narratives that are portrayed in society and it is an important reason as to why I write. That doesn’t mean every Muslim woman or women’s experience is the same, but the more we contribute to diverse narratives, the more we can add to this richness of experience and it is needed in a world where stereotypes tend to dominate.

When is the book out for release?

The Tower is due to be launched in April 2019. For Advanced Reader Copies, please contact Beacon Books.

Shereen Malherbe is a writer & author. Her novel, Jasmine Falling has been voted as one of the top 20 Best Books by Muslim women. Her second contemporary fiction novel, The Tower, was published by Beacon Books on April 2019. Her first children's book, The Girl Who Slept Under The Moon is coming soon. View more posts