“Jasmine Falling is the debut novel of British Palestinian writer (and MMW Contributor!) Shereen Malherbe. It is a tale of self-discovery and finding belonging, set mostly during ten action-charged days in Jerusalem, where Jasmine travels to find her missing father after her mother’s death.  I spoke with Shereen about the inspiration for the novel, the work of writing it, and what advice she would give aspiring novelists.

I would describe it as all of the above! The best advice I was given was to be a storyteller. My interpretation of this, was to include elements that make the journey memorable so by weaving in these genres it hopefully offers that to my readers.” 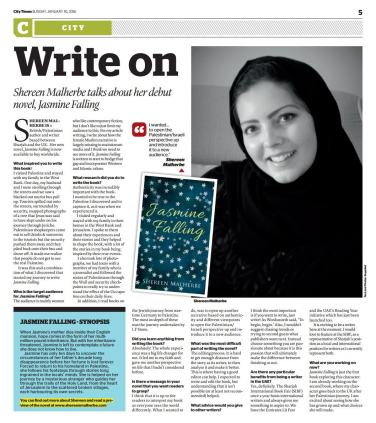 Interview in the City for  Khaleej Times.

“What inspired you to write this book?

I visited Palestine and stayed with my family in the West Bank. One day, my husband and I were strolling through the streets and we saw a blacked out tourist bus pull up. Tourists spilled out onto the streets, surrounded by security, snapped photographs of a tree that Jesus was said to have slept under on his journey through Jericho. Palestinian shopkeepers came out to sell drinks & souvenirs to the tourists but the security pushed them away and they piled back onto their bus and drove off. It made me realise that people do not get to see the real Palestine.

It was this and a combination of what I discovered that started my journey to write Jasmine Falling.

What research did you do to write the book?

Authenticity was incredibly important with the book. I wanted to be true to the Palestine I discovered and to capture it, as it was when we experienced it.

I visited regularly and stayed with my family in their homes in the West Bank and Jerusalem. I spoke to them about their experiences and their stories and they helped to shape the book, with a lot of the stories in my book being inspired by their true events.

I also took lots of photographs, we had tours with a member of my family who is a journalist and followed the routes of Palestinians through the Wall and security checkpoints to really try to understand the effect of the Occupation on their daily lives.

In addition, I read books on the Jewish journey from wartime Germany to Palestine. The most in-depth of these was the journey undertaken by I.F Stone.”

Read the full interview with the U.A.E’s Khaleej Times here. 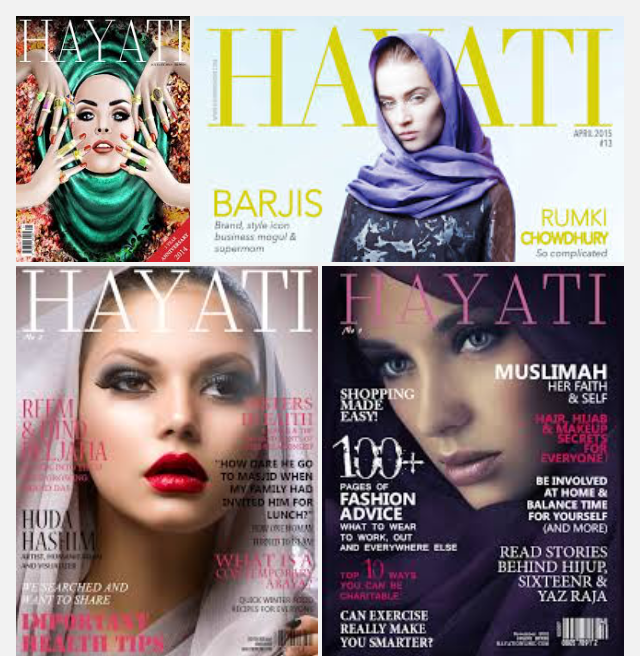 PF: Congratulations on your novel, Jasmine Falling, being published! Masha’Allah. I have to say that at first, your main character came off as a Muslim person to me. So, some of her choices made me ponder for a moment because my subconscious played the haram police a bit. *Laughs.* Was your intention to put a little doubt in the mind of your readers so that they learn not to judge?

SM: Thank you. Alhamdulillah for the opportunity to write it. My intention with my novel was to show a journey with Jasmine. At first, she associates herself with her British heritage and she has never had the opportunity to learn about her faith. My novel is designed to introduce the beauty of Islam into modern literature from an outsider’s view so it was important that Muslims and non-Muslims can relate to the character. I believe that relatable fiction is more important than portraying characters who never do anything wrong because that isn’t real life. And I guess, if it teaches you not to be judgmental then that can only be positive! ”

To watch Shereen’s appearance on the BelAhdan Show discussing writing, Palestine and her novel click here.

Shereen Malherbe is a writer & author. Her novel, Jasmine Falling has been voted as one of the top 20 Best Books by Muslim women. Her second contemporary fiction novel, The Tower, is now used as academic set text in a US university. Her migrant children's book series, The Girl Who Slept Under The Moon was followed in 2022 with, The Girl Who Stitched the Stars. Her short story, The Cypress Tree has been published in World Literature Today's landmark edition on Palestine Voices. Her latest novel, a Palestinian reimagining of Jane Eyre, The Land Beneath the Light has been nominated alongside her children's book, for the Palestine Book Awards 2022. View more posts